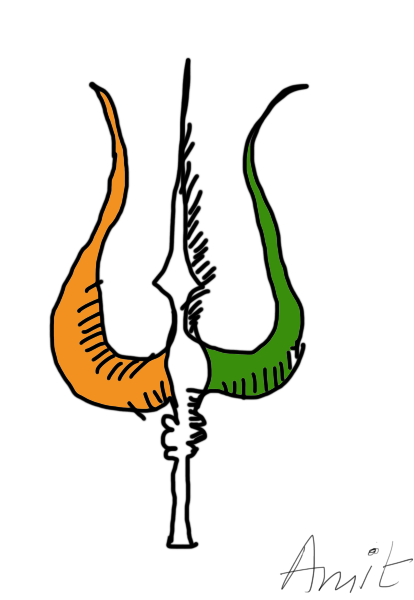 India – the birthplace of Sanatana Dharma

India has been known as a pacifist country. The land of Buddha and Buddhism. India’s first Prime Minister of the divided country, Nehru, was known for slogans such as “Hindi Chini Bhai Bhai” (Indians and Chinese are brothers). In the 1950s, China was an impoverished country, but it did not hesitate to attack Tibet and annex it. Instead of protesting this, Nehru, who was enamoured of communist ideology ignored this blatant act of territorial aggression by the Chinese and refused to bring it up with Mao even once. Nehru forced India to abandon the Tibetans and blocked any discussions in the United Nations ( the UN whose offer of a seat as a permanent member of the security council to India, was also refused by Nehru, in favour of the Chinese).

Anyway, Nehru’s appeasement of the Chinese, to get along better with them, alas, didn’t work and the latter attacked India in 1962. Once again, Nehru made sure that policies were adopted that would lead to India’s defeat in that war.

If you were to look beyond Nehru and the Buddhists, India has a long history of glorious martial tradition, with rulers and Kings such as Purushottam ( called Porus by the Greeks because they couldn’t pronounce his full name), who defeated Alexander, even though Greek and leftist Indian historians claimed that Alexander defeated King Purushottam, but let him live because of his bravery ( yeah, right !).

From Chandragupta Maurya, who united the disparate smaller Indian states into one mighty empire, to Vikramaditya, who uprooted the Saka-Kushans, to Samudragupta, Yashodarma, Bappa Raval, Shivaji and Netaji, the list of Sanatani warriors is too long to do justice in one paragraph.

What does Sanatana Dharma tell us about war ?

Coming to the topic of war and whether it can ever be justified according to India’s ancient dharmic principles, the answer is – yes, it certainly can be.

So in a war, Shri Krishna , and therefore Dharma itself, is always on the side of one party. War is justified to uphold the natural principles of dharma and the right of all human beings to live according to its principles.

Victory is assured to the dharmic party, provided they are guided by principles of Sanatana Dharma or by Shri Krishna himself.

Now, in the absence of Shri Krishna and if neither party is dharmic, then unfortunately, both sides will fight and one side will win – usually the more powerful side – or both sides will lose.

What if one side is the clear aggressor and the other side is an innocent victim ?

If that is the case, then the aggressor obviously invites the wrath of Karma on a grand , cosmic scale that will have far reaching debilitating consequences.

We need to examine what has that state done ? Has it collaborated with other , larger and more powerful forces of adharma ? Has it done anything to provoke the other side ?

Does that weaker and aggressed state have a boatload of negative Karma on its plate?

Sadly, the modern world has degenerated into a battlefield of narratives, extreme ideologies and powerful cabals driving events to their benefit, regardless of the interests of the ordinary people.

But , if you take the time and strip out the shrill, hysterical, sanctimonious and holier-than-thou sermons, you will be able to discern the various interests driving people and organisations. The Dharmic quotient is more difficult to determine, but is not impossible. Happy analysing and happy meditation !

0 1100
Is it somehow wrong to declare my Hindu faith openly?